This is a fascinating picture. 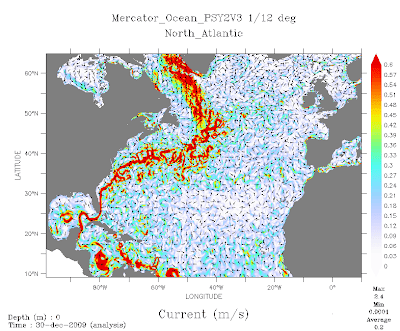 It shows the gulf stream in the north Atlantic on New Year's Eve diverted from it's normal course towards western Europe and flowing up the eastern coast of Greenland. 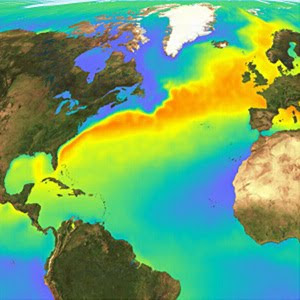 It is the single biggest cause of the exceptional and unprecedented winter weather in recent weeks.

Anyway I've taken it from an article explaining how the warm air associated with the gulf stream has pushed itself up into the Artic basin and displaced the cold air there onto the continental land masses of Northern America and Eurasia.

Well, I'm hardly original in picking up on this - it's been widely predicted since 2005 (see here).

But I do think it raises some interesting questions about the permanence of any shift and the politics of the environmental movement.

Obviously a rare climatological event of this nature will be taken as direct evidence of anthropogenic effects on the environment, and indeed it is the most extreme occurrence of the effect seen in the past half-century since the gulf stream was first identified and began to be studied.

However, as there seems to be some correlation between a similar event and the extreme winters seen in 1947 and 1963 I'm not entirely convinced that this is the whole story.

Just as oceanographic flows like the 'El Nino' and 'La Nina' effects in the Pacific basin are periodic occurrences (which some have connected with solar activity), resulting from perfectly normal ecological processes, it strikes me that the flow of the gulf stream can only be connected to the wider ecology of the planet.

Melting of polar ice (as seen in the video)

requires that the colder water must go somewhere, and it seems obvious (to me at least) that the water has interupted the Atlantic Conveyor and caused the shift in the Gulf Stream.

Firstly, it is plainly absurd that the Arctic ice-cap can continue melting at ever-increasing rates for the simple reason that at some point the ice will be all gone.

Secondly, it is plainly absurd to say that the effect of ice melt rates will not cause a cascading chain reaction of environmental effects which will act in mitigation of continuing warming.

Thirdly, it is completely absurd to imaging a world in which the polar regions will not retain a specific polar climate, since the polar regions and seasonal nature of weather on Earth are a direct consequence of the inclined orbit around the sun.


However, it is also patently clear that while the Earth's ecological system is created by these astronomical coincidences and has in-built feedback systems capable of mitigating extremes this does not mean human-kind is completely insulated from situations which would be disasterous to huge numbers of people.

So the potential loss of the arctic polar cap is a threat in the near-term, but it is also quickly reversable once environmental equilibrium is reestablished.

I fully accept that the failure of the recent Copenhagen conference on climate change is brought into direct focus by the weather of recent weeks and the international community cannot be complacent in leading global society towards the environmental precipice, but I also consider the shriller voices among the so-called 'green' campaign bandwagon descended unhelpfully into hyperbole based on a more ideological rationale rather than evidence-based reasoning.

Even to my amateur eyes the following chart exaggerates for effect. 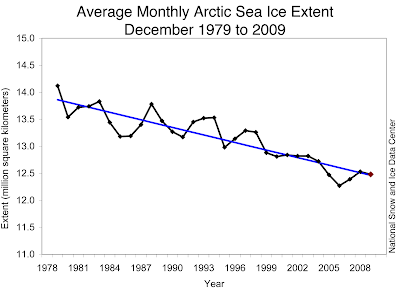 Looking at the angle of the blue line we can see a general decline in polar ice over the past 30-year period, but I would criticise it on two specific grounds: -

1) the 30-year period is far too short to draw any firm conclusions (it doesn't even include the recent severe winters of 1947 and 1963, for example, and it deliberately excludes the period of the 1970s when the seemingly perpetual energy crisis gave rise to concern about global cooling)
2) the minimum and maximum extents of ice coverage seem to be within the bounds of normal variation - up until 2000

From which I can confidently dismiss the assumption of a straight-line or steady decline.

Just like with a pressure cooker, when we build up environmental pressures eventually it will let off the steam, and the change in gulf stream flow and associated heavy winter across northern America and Eurasia are a direct (and major) manifestation of this process.

From a personal perspective an occasional change is as good as a holiday and the break from the norm does provide an opportunity to put things in perspective.

So in attempting to reach a conclusion it seems a fair statement to say that man-made industrial activity (ie the pumping of greenhouse gases including CO2 into the environment) is not a one-way road to destruction, rather that it is likely to increase the volatility of weather events, which in turn has major consequences for living life under regular conditions.

And equally, while I can understand the disgust with ignorant, complacent and corrupt establishment politicians leading to a rise in apathy and fringe parties, I do not think these alternatives affer anything more positive or more beneficial.

While I have no desire to experience permanent drastic climate change of the sort seen around us currently and I recognise some serious effort needs to go into modifying societal behaviour, I also don't think it needs anything like as revolutionary a set of changes as some more extreme voices are using as a front to gain traction for their wider social ambitions.

So that's a YES to environmentalism and ecology, and a NO to 'Green' politics, then.

Update: Blimey! The weather must be wierd if central Florida is expecting snow!
Jennie and matgb have posted a collection of interesting links with some good discussion.

And there is an interesting video of antarctic ice where you can see the seasonal changes here:
http://wattsupwiththat.com/2009/07/01/new-sea-ice-video-this-time-watch-the-antarctic/

The (ice driven?) gulf stream changes as explanation for cold winters is interesting. But...

For this you really need the A part of AGW. And that is the weakest point in the AGW argument.

Thanks for those links, they're really helpful.

I accept the point about the exact effect of humanity on the environment is not completely proven beyond reasonable doubt, yet, but I don't think that's any reason not to use the tools at our disposal to try to improve the situation.

Where I agree with the libertarian argument is in that the state shouldn't intervene directly in individual choices, nevertheless government should work to continually improve the range of choices available.

The US car industry is a case in point - it is no good waiting until the worst consequences of the constantly changing climate are apparent before they have an impact on market-driven choices (eg regarding the popularity of SUVs).

Corrections (by definition) only come when they are almost too late, so it is incumbent to refine our ability to discern feedback - which means basing policy judgements on the balance of probability rather than absolute certainty, because when it comes to matters of a global nature there are no excuses and no second chances.

So there is a strong case for taxation as the means by which unknown hidden costs are paid for (though again we should be wary of their being used as a blunt instrument).

Petrol prices in the US have historically been based primarily and exclusively on the costs of production rather than being a measure of usage by consumers, which has allowed the link between the two could be effectively ignored and corporate risk and responsibility minimised, if not eliminated.

There remains a big job to change the values of this overly-consumerist culture back from purely quantitative to more qualitative measures.

Though this can't be state-driven, I do think there is an important role for the state as the ignition key to the system and spark the motor of change.

I think the word I'm looking for may be 'leadership'... and I think we agree that there are serious questions about the direction our current leaders are going.